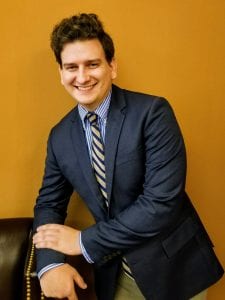 Cody J. Burgin is a newly admitted attorney chomping at the bit to zealously represent clients and their family law needs. He was born in Louisville, Kentucky before ending up in Charlotte, North Carolina at the age of seven. During his senior year, Mr. Burgin’s family moved to Rock Hill, South Carolina, where they continue to reside. After graduating from high school in Charlotte, Mr. Burgin enrolled at Appalachian State University. He graduated as a double major in Creative Writing and Spanish in 2014. He then immediately enrolled at the University of South Carolina School of Law, where he became a member of the South Carolina Journal of International Law and Business. He received his Juris Doctor (JD) in May, took the bar exam in July, passed it, and was sworn in as a South Carolina attorney in November.

Mr. Burgin’s even-keeled manner and patience will ensure that he does not lose his composure while fighting for your rights and needs, whether in mediation or in the courtroom. Because he is a new lawyer, Mr. Burgin is driven to give it his absolute all for every client in order to make a name for himself as the fort mill family lawyer.